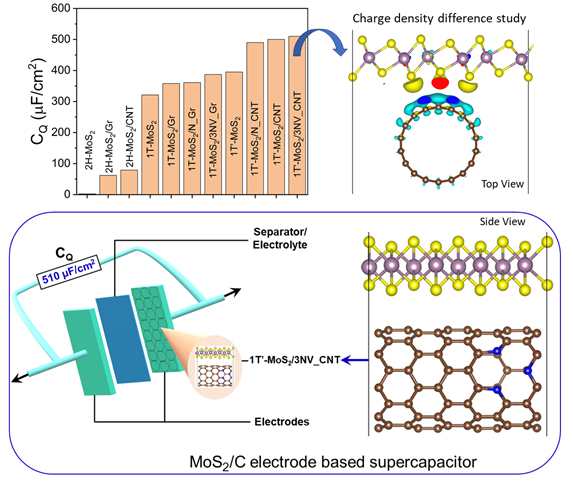 A research paper titled “First Principle Identification of 2D-MoS2 based Composite Electrodes for Efficient Supercapacitor Application” is published by Samadhan Kapse, PhD student, as First Author and Bennet Benny, BSc Physics Student, (Same Contributed First Author) in the Journal of energy storage, Elsevier having an Impact Factor of 6.583. The paper publication has been guided and supervised by Dr Pranab Mandal (Co-Author) and Prof Ranjit Thapa (Corresponding Author) from the Department of Physics, SRM University-AP.

1T Molybdenum disulfide (1T-MoS2) has been widely studied experimentally as an electrode for supercapacitors due to its excellent electrical and electrochemical properties. Whereas the capacitance value in MoS2 is limited due to the lower density of electrons near the Fermi level, and unable to fulfil the demand of industry i.e. quantum capacitance preferably higher than 300 μF/cm2. Here, we investigated the performance of 2H, 1T, and 1T’ phases of MoS2 in its pristine form and heterostructures with carbon-based structures as an electrode in the supercapacitors using density functional theory. Specifically, we reported that the underneath carbon nanotube (CNT) is responsible for the structural phase transition from 1T to 1T’ phase of MoS2 monolayer in 1T’-MoS2/CNT heterostructure. This is the main reason for a large density of states near the Fermi level of 1T’-MoS2/CNT that exhibits high quantum capacitance (CQ) of 500 μF/cm2 at a potential of 0.6 V. Also, we observed that the nitrogen doping and defects in the underneath carbon surface amplify the CQ of heterostructure for a wider range of electrode potential. Therefore, the 1T’-MoS2 /N doped CNT can be explored as an electrode for next-generation supercapacitors.

Using density functional theory, we can identify the promising electrode materials for supercapacitor application based on various graphene, 2D metal chalcogenides and their heterostructures. The quantum capacitance (CQ) is the cost-effective method to estimate the performance of any low density of states materials such as graphene, MoS2, etc towards supercapacitors.